After several days of hunger strike, all 14 activists of the “San Isidro Movement” were arrested by Cuban security forces. Shortly before the house was stormed, many online services in Havana and large parts of Cuba were interrupted.  All participants in the strike were released from police custody within a few hours.

Havanna /Frankfurt am Main, 27th November 2020 – During the night of 26th to 27th November, all 14 activists of the “San Isidro Movement” were arrested under the use of force by Cuban security forces. Shortly before the storming of the house, many online services in Havana and in large parts of Cuba were interrupted. The strikers have been protesting since November 18th against the detention of the Cuban rapper Denis Solis. The International Society for Human Rights (ISHR) condemns the arbitrary arrest and use of force against the activists demonstrating peacefully in-house, and calls on European governments to sanction the Cuban regime. All participants of the strike were released from police custody within hours.

“The rulers in Havana risk deaths and deathly silence.They cannot bear the criticism neither from artists nor ordinary citizens. This Cuban government is responsible for the impoverishment of the people. It has created a climate of lack of perspective and fear of the future. Critics are forced into self-sacrifice, emigration or hunger strike. The storming of the artists house proves once again that Cuba is ruled by a brutal dictatorship,” explains Martin Lessenthin, ISHR spokesman.

Under the pretext of finding “irregularities” in the Corona PCR test result of Carlos Manuel Alvarez, three doctors entered the house and asked Álvarez to accompany them. Álvarez, who is the editor of the magazine “El Estornudo” had come to Havana from the USA a few days earlier to accompany the group and had a Corona test taken before leaving. After the journalist did not agree to leave the house with the doctors, they announced that the journalist would be charged with a crime. The alleged doctors could not identify themselves as such at the request of the group.

A few minutes later, professors Anamely Ramos and Omara Ruiz Urquiola reported a growing police presence outside the group’s home in Havana in a live video broadcast via Facebook. Subsequently, the services Facebook, Instagram and YouTube were interrupted all over Cuba, which the activists mainly use for communication. The strikers were arrested using force. 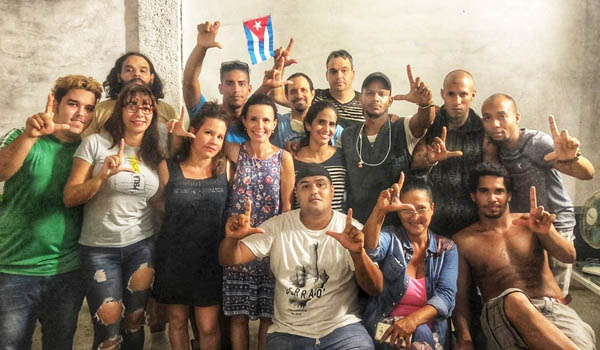 With a hunger strike, members of the “San Isidro Movement” demand the release of the Cuban rapper Denis Solís and an end to violence against civil rights activists.